What to do in Naples in one day?

Naples is a city in southern Italy, in the bay of Naples, bathed by the Tyrrhenian Sea – Naples is known for its history, music and pizza. Its historic center is a UNESCO World Heritage Site and if you have only one day available, you can visit the most important part of the city. Let’s visit Naples?

What to visit in Naples in one day?

Naples is a city in southern Italy, located in the bay of Naples, on the Tyrrhenian Sea. Known for its history, music and pizza, Napoli (in Italian) is AMAZING! Its historic center is a UNESCO World Heritage Site and, in one day, you can visit the most important tourist spots in the city.

So, here’s our post: What to do in Naples in one day? Stay with us and make the best of boot shaped country! Here at Your Travel to Italy with Ana Patricia you make the trip of your dreams!!! ALSO: see our “Accommodation in Italy – Tips for your holidays!”

NOTE: this is a guest post by Antonietta, Brazilian guide in Campania.

Our special thanks for your collaboration!

Take a look at the awesome Naples, Campania.

1) What to visit in Naples in one day? VISIT THE PIAZZA PLEBISCITO, THE ROYAL PALACE, THE GALLERY, THE THEATER AND THE MASCHIO ANGIOINO

In the morning we can visit the monumental Naples center, where you will find the Piazza Plebiscito and the Royal Palace, where since the 1600 the Vice-Kings and Kings of the Kingdom of Naples have lived; then, passing by the Toledo Avenue, we will enter the Galleria Umberto I, which was born as a mall at the end of the 19th century; we can also admire the S. Carlos Theater and the Maschio Angioino on the outside. Also read: How to go to Naples from Rome?

2) What to visit in Naples in one day? VISIT THE HISTORIC CENTER

Soon after lunch we will go to the Historical Center of the City, where you can admire the Church of Santa Clara, Spaccanapoli that is the street that ‘cuts’ the city in the middle of the center, Square S. Domenico, the Street S. Gregorio Armeno: this street is the street of the nativity scenes, where we still have the old masters. Read also: The five best pizzerias in Naples?

3) What to visit in Naples in one day? VISIT THE ARCHAEOLOGICAL MUSEUM

And last but not least, don’t miss the Archaeological Museum in Naples! A unique experience! Read also: What are the top 10 monuments of Naples?

Map 01 with the attractions in Naples in one day 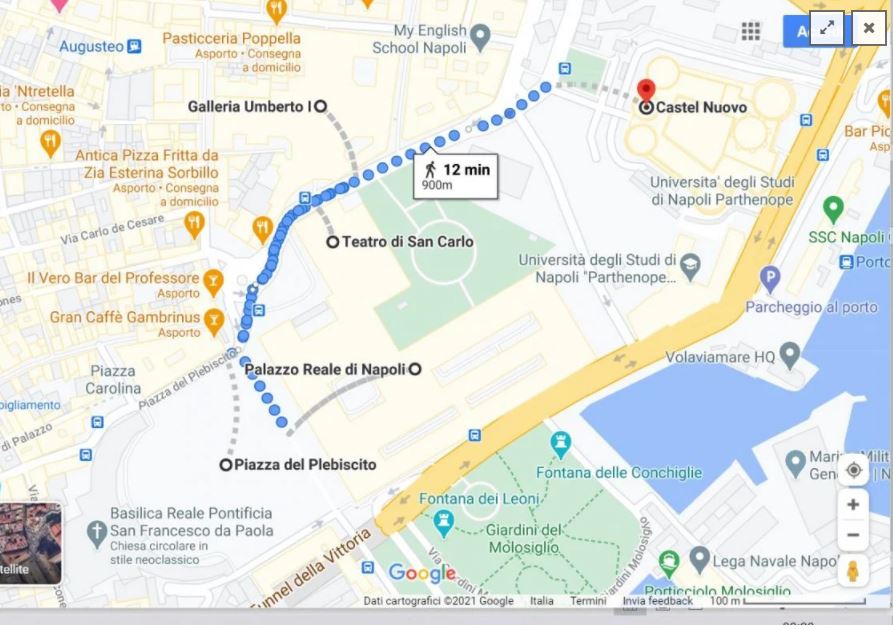 Map 02 with the attractions in Naples in one day 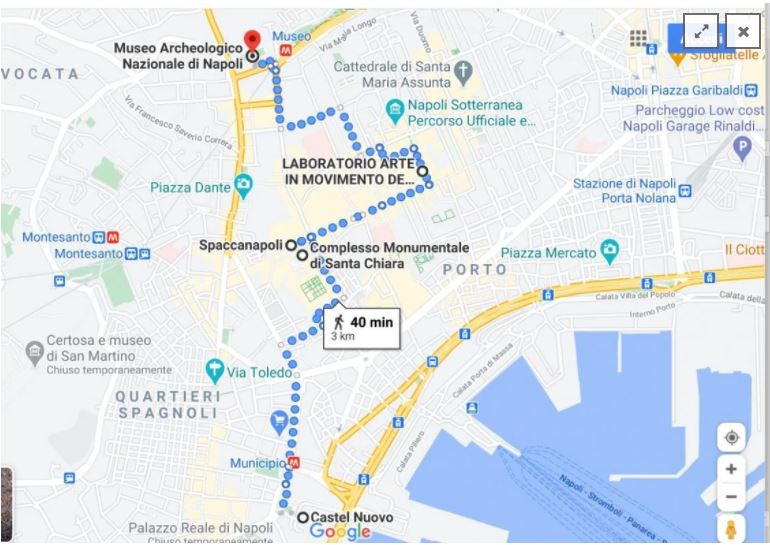 How to get to Naples?

Naples is a city well connected with the rest of Italy and is easily reached by plane, car or train.

Naples Capodichino International Airport is one of the most important in Italy. Airplanes from all Italian, European and international destinations leave and arrive in Naples. All line and low-cost companies stop at Naples. There are two main lines that lead to the city center: the 3S line that connects Garibaldi Square (Central Station) from where it is very easy to take all the buses or subways that drive towards the various parts of the city. The 3S line leaves every 30 minutes from the arrival fronts, from 5.20 a.m to 11.20 p.m. The ticket (single) costs 1.10 euro per person.

Also read our Special Posts on Airports in Italy:

Naples has three main stations from where arrive and leave trains from other Italian cities and abroad. The Central Station (Garibaldi Square) is the most important one; it has twenty-two binaries where trains from all Italian destinations arrive. Central Naples is advisable for those who should arrive in the center of the city or Molo Beverello to board to the islands.

Naples Mergellina is the intermediate station, near Molo di Mergellina from where the boats leave for the Gulf islands. Naples Campi Flegrei is the stop outside the city center and the closest one to the stadium. It is ideal for those staying in hotels in Fuorigrotta, Bagnoli, Pozzuoli and Campi Flegrei. All three stations are integrated with the subway lines and are the departure and arrival spots of the city buses.

Did you know that Trenitalia?

Did you know that Trenitalia is the main Italian company of rail transport? Also find out “What is the difference between trains in Italy?”. Would you like to save? So buy your ticket online in advance and save a lot, read the Post “How to buy a train ticket in Italy?“.

For those arriving from the north, the main road leading to Naples PE is the Milano-Napoli highway. Passing the castle di Caserta Sul it has a junction of approximately 8 km that leads to the various exits towards the city.

For those who should arrive in the center:

For those who should arrive in the center, it is advisable to follow the indications to Naples Center – Porto – Maritime Station – Central Station. A few km later there is a split where you must take the direction to the port, which passes by the Via Marina or the direction Central Station, which always leads to the center, but passes the jammed Corso Umberto. If you need to reach the areas that are far from the center (Fuorigrotta, Bagnoli) you should take the tangential exit.

If you arrive from the south:

If you arrive from the south by Salerno- Reggio Calabria you will arrive at the same intersection and you must follow the indications Naples Center – Porto – Stazione Maritima – Central Station or Tangential. Bari-Napoli also arrives at the junction where you will find the exits to Tangencial or Naples Centro. TRAVELING BY CAR IN ITALY: EXAMPLES OF TOURS

Traveling by car in Italy

How about if I give you a rental car option? Are you ready for it? If you are renting a car be sure to read our posts in the section Driving in Italy on the blog Your Travel to Italy. In addition to car itinerary tips, we have everything about signage, tolls, roads and many more tips. 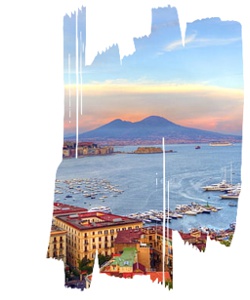 PLACES TO STAY IN NAPLES

The best information and tips for your stay in Naples!

A Brief History of Naples in
chronological order

Our text will follow a chronology (period from 475 BC to 1799), in order to organize the events that took place in Naples reporting the actual temporal sequence of past events.

On 21 December 475 BC, Neapolis was born from a group of Greek exiles. The city of Naples is a land rich in history and traditions, dominating the gulf of the same name and is surrounded by wonderful places such as Vesuvius, the Sorrento peninsula, the islands of Capri, Ischia and Procida and the Campi Flegrei.

The Duchy of Naples, in 536, was conquered by the Byzantines during the Gothic war, later becoming an autonomous duchy. According to tradition the first duke was Basilio, in 660-61 by the Byzantine Emperor Constant. Agter this periodo the Normans took control, between 1130-1194. In 1139 Roger II of Altavilla conquered the city and Naples thus becomes part of the territory of the Principality of Capua, in the newborn Kingdom of Sicily, with Palermo as its capital.

Between 1194 and 1266, the Swabs arrived in Naples; it was in 1194 that the Kingdom of Sicily passed into the hands of the Hohenstaufen, a dynasty linked in a particular way to the memory of the illustrious Frederick II of Swabia; The Angioini, that dominated the city between 1266 and 1442, it was of great importance for Naples.
In the Angevin period, important and famous monuments were built in Naples such as the church of Santa Chiara, the Basilica of San Domenico Maggiore, the Duomo, the Basilica of San Lorenzo, the Maschio Angioino, and Castel Sant’Elmo. It was in that period that Castel dell’Ovo is also enlarged and embellished.

In 1442 Naples changed hands becoming an Aragonese possession by Alfonso V of Aragon, known as the Magnanimous. An “enlightened” ruler who made the kingdom an artistic and cultural center. After being briefly in French hands, the whole south becomes a Spanish province in which 40 viceroys and 20 lieutenants alternate. The Kingdom of Naples, from great power, enters one of the darkest periods of its history.

During the war of the Spanish succession, Austria conquered Naples, in 1707, but kept it for a few years, until 1734, when the kingdom was conquered by Charles of Bourbon. During the eighteenth century, the Bourbons promote the rebirth of the Kingdom of Naples which becomes independent in 1734 with King Charles. Many works created during the period: the Capodimonte Palace, the San Carlo Theater, the Albergo dei Poveri, the Royal Palace of Caserta, the Capodimonte porcelain factory.

The year of 1799 was a crucial year for Naples, because the Neapolitan Republic is proclaimed led by Neapolitan enlighteners animated by strong ideals of equality. The Republic was short-lived. After the Napoleonic interlude and the Restoration, the events of Naples merge with the history of a united Italy.

Nowadays the Capital of the Campania Region and the considered the capital of Southern Italy, Naples covers an area of ​​117 square km, with a population of over one million inhabitants.

Watch this video: 10 cities to visit in italy?

What to do in Naples in one day? Naples may not be the safest city in Italy, but it will certainly delight you with its historical and cultural heritage. Naples is an almost mandatory stop for anyone visiting southern Italy. If you’re around, and have a little extra time, take a quick tour through this amazing city called Naples!

What to do in Procida?

How to drive in the snow in Italy?

What to do in Florence in winter?