What to see in Rovigo?

The city, located between two large rivers, Adige and Pó, is perhaps the least known provincial capital, but leaves nothing to be desired by the most famous. Today we shall get to know the delightful Rovigo.

What to see in Rovigo?

Capital of the Province of the same name, Rovigo presents itself in a simple, friendly, welcoming, but very refined way. Rovigo is in the Veneto region and, with its fairytale atmosphere, makes our hearts flutter. What to see in Rovigo? Here at  Your Travel to Italy with Ana Patricia you make the trip of your dreams !!! ALSO: see our  “Accommodation in Italy – Tips for your holidays!”

Rovigo is a province and its homonymous capital is in the region of Veneto . It has about 250 thousand inhabitants and, to the north, it borders the provinces of Verona, Padua and Venice; to the west with the province of Mantua (in Lombardy), and to the south with the province of Ferrara (in Emilia-Romagna); to the east, we find the Adriatic Sea. The area is that of Polesina and is caressed by the breeze that comes from the sea, with a touch of the rivers Pó and Adige.

(Source: Places to see in)

1) What to see in Rovigo? VISIT THE SOCIAL THEATER

We start with the Historic Center of Rovig or. It can easily be explored on foot and most monuments are concentrated close to each other. Walking there, you come across the most important squares in the city, as well as Piazza Garibaldi, where you can see the beautiful Neoclassical-style Social Theater. Built between 1817 and 1819, the Social Theater currently hosts a popular season of performances including readings, operas, dance performances and much more. Today, only the beautiful façade and the foyer remain of the original theater, as a fire in 1902 destroyed the beautiful built hall, which was practically all made of wood for acoustic needs.The theater was immediately rebuilt, maintaining the neoclassical façade and the foyer with frescoes, but the hall was erected in reinforced concrete, tested, and proved to be ideal for the acoustics of the place.

2) What to see in Rovigo? VISIT ROVIGO TOWERS

In Piazza Giacomo Matteotti, the highlight is the Donà Tower, emblem of the city, and the Mozza Tower; vestiges of the old medieval fortification give us an idea of ​​the magnificence of long ago. The path retraces the remains of the old walls and is very interesting. The remains of the Castle and the defense towers also offer the Grimani Tower , famous for its slight declivity, although the upper part has collapsed; it is also called the concave tower.

3) What to see in Rovigo? VISIT RONCALE PALACE

Head to Vittorio Emanuelle II Square, where you will find the column with the Lion of St Mark, that recalls the presence of the Serenissima in the region. This square is also the main meeting point of the city, which is surrounded by elegant noble palaces, such as the Roncale Palace, from the 16th century, with free entry, but it is necessary to make a reservation, and also accessible as a guided tour. Roncale Palace houses a collection of period furniture, sculptures and tapestries and the collection of artists of the 20th century from the Padua and Rovigo Caixa Economica Foundation.

4) What to see in Rovigo? VISIT THE CHURCH OF THE BLESSED VIRGIN OF AID

Some churches, among the many present in the city, are worth a visit. The Church of La Beata Vergine del Soccorso, also known as Rotonda, is one of the most important places of worship in Rovigo. The church has an octagonal shape and is fascinating, but its interior is the real pearl of the place. It was built to preserve the image of Our Lady, considered miraculous; it has walls decorated with frescoes and canvases and, in fact, its beauty impresses!

5) What to see in Rovigo? VISIT THE ROVIGO CATHEDRAL

Also a must-see is the Cathedral of Rovigo, which was built around the year 1000 and rebuilt in 1461 and 1696. In fact, the facade was never completed, although, over the centuries, it has often been thought about how they could complete the work, but the various projects presented never came to fruition. Dedicated to St. Stephen, it features a single brick wall with its 19th century portal and a statue of Jesus placed in the niche above it. The interior preserves countless precious works of art, including, on the altar in the left transept, the “Christ, the Risen” by Palma the Young.

6) What to see in Rovigo? VISIT THE CHURCH OF SAINT FRANCIS AND GIUSTINA

Another church worth visiting is the Church of Saint Francis and Giustina; it is one of the main churches in Rovigo and has undergone numerous renovations over the centuries. The façade was altered by the restructuring of the 19th century, but as soon as you turn the corner you can already see the Romanesque-Gothic layout of this huge religious complex that dates from the 1300s and 1430s, in addition to the bell tower, from 1520. The interior houses many precious works of art; “Pietà”, by Tullio Lombardo, which is on the third altar, on the left, draws attention.

7) What to see in Rovigo? VISIT ROVERELLA PALACE AND MUSEUMS

Another beautiful tourist spot is the Roverella Palace. The Palace is one of the most beautiful mansions in Rovigo and today houses the Gallery of Modern Art in the city, very important for the Veneto region. Here you will find the Accademia dei Concordi photo gallery, which organizes prestigious contemporary exhibitions. Be sure to visit the Museum of the Great Rivers. In the old Olivetan Monastery of St Bartholomew, a museum is perfect to visit if you are with children. The Museum of the Great Rivers is full of models and multimedia installations that cover the Polenisa region and presents material from the Bronze Age to the Renaissance.

What to visit around Rovigo?

The Polesina area is a historic region between the Adige and the Po up to the Adriatic Delta and which today is entirely included in the province of Rovigo. You can also find many canals and small valleys, which were built by the Republic of Venice during its rule. The roads that cross these plains are built on the banks and follow the winding course of the streams. A tip: take the route by bike.

The Natural Park of the Po River Delta is divided between the provinces of Ferrara and Rovigo, and is the pride of the region.

Another very charming place in Fratta Polesine, 15 km from Rovigo, is Villa Badoer, a UNESCO World Heritage Site and one of the most beautiful villages in the region.

For unforgettable views, visit Sacca degli Scardovari, which is the largest lagoon formed by the waters of the Po River. In addition to the lagoon, you will find land recovery sites with ruins and farmhouses immersed in a splendid plain! TIP: eat the fried mussels! They are unmissable!

The town of Adria

The town of Adria is another place close to Rovigo that deserves to be highlighted! Its old historic center follows the evolution of the River Pó Delta, guaranteeing river trade in Greek and Roman times, and protected the city from barbaric invasions. Today, it is the gateway to the Pó Natural Park.

One of the most touristic places in the area is Rosolina Mare. It is at the mouth of Po River and ‘faces’ the Adriatic Sea. The Caleri lagoon is a privileged place to observe migratory and sedentary birds, including the beautiful pink flamingos. This is where you can find the most beautiful villages in Veneto, definitely.

Ancient, the first document about the city dates back to April 24th, 838, where Rovigo is defined in Latin as a village, Villa Rodigo which, at that time, was a rural village. In 920, the bishop of Adria, Paolo Cattaneo, ordered a fortification to be built on the banks of the Adigetto River, transferring the headquarters of the bishopric there. This first fortification was completed in 954 and was later followed by the construction of the walls during the Este period, between the 12th and 15th centuries.

A little more of Rovigo’s History

The Este domain over Rovigo, which lasted for almost three centuries, was made official by the Holy Roman Emperor Henry VI in 1194, with Count Azzo VI and then with Obizzo II d’Este. Subsequently, the territory was disputed by the Republic of Venice, which, in the 15th century, began to expand. During the Salt War, Venetians entered Rovigo in 1482 and stayed there until the Franco-Austrian period (1797-1866). The presence of ancient Venetians, Etruscans and later Romans is certain, even though the foundation dates back to the 19th century, and there is no lack of evidence of this important presence. The castle tower, now known as the Donà tower, 66 meters high, is one of tallest medieval Italian towers, it was almost certainly the tallest masonry tower of its time.

During its rule, the Republic of Venice wanted to impress and leave its mark. For this, he built Maggiore Square (the current Vittorio Emanuele II Square) , the civic tower and the column with the Lion of St Mark, dating from 1519. At the beginning of the 19th century, just after the fall of the Republic of Venice and the establishment of the French rule, Rovigo was renovated and gained social and cultural momentum, becoming the incredible city that we know today! TIP: To access the map for printing, click CLICK HERE!

Map with attractions in Rovigo 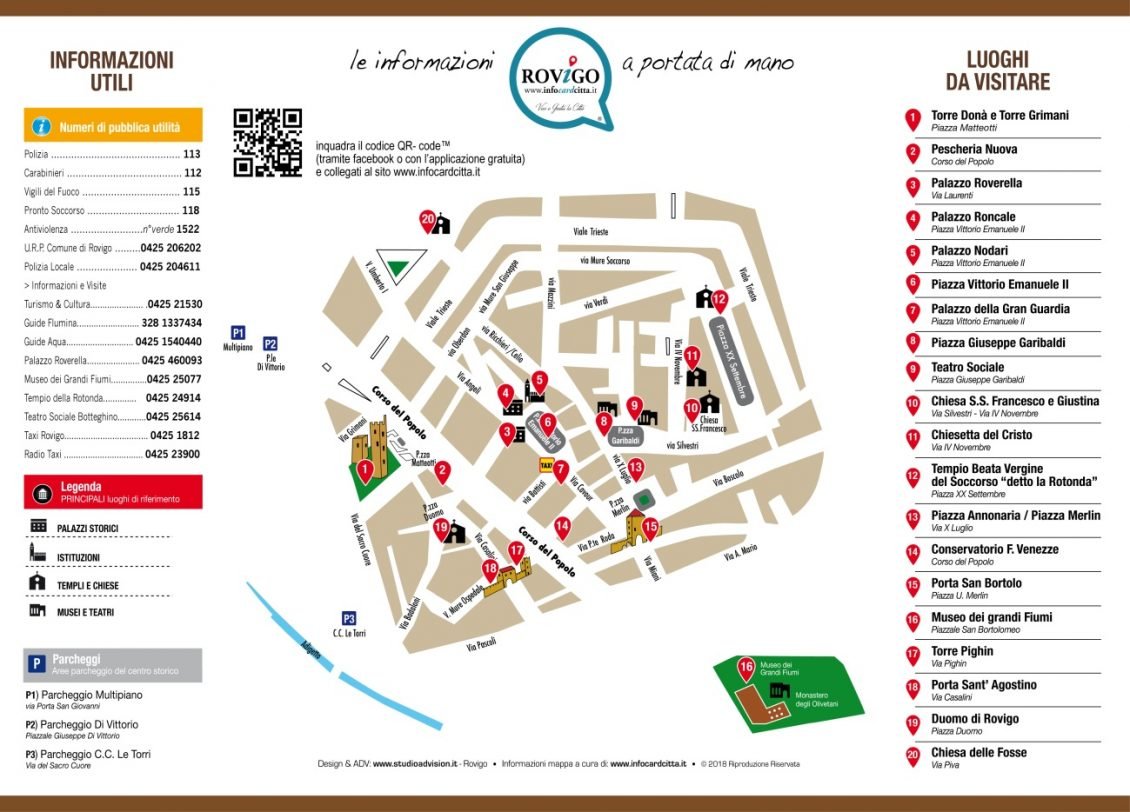 What to see in Rovigo? The city is not big, but it pleases those who visit it and offers several walking options between squares, churches, museums, towers and medieval doors, Rovigo will win over your heart. And if you feel insecure or have no time, and need  help to organize your trip,  do not hesitate to look for me! I will love to help you make your dream trip to Italy. And how can I do that? Continue reading this post until the end and you will understand how can we make your life and journey easier.

How much will I spend on a trip to Florence?

How to choose a good seat on Italian trains?