MonticchielloTravel TipsWhat to do in 1,2, 3 days?

What to do in one day in Monticchiello?

Little known, Monticchiello is a small town in the province of Pienza, Siena, Tuscany. Full of charm, the city is gorgeous and worth a visit!

What to do in one day in Monticchiello?

In the heart of Val D’Orcia, Monticchiello goes almost unnoticed by tourists visiting Siena. Little known, the city is charming and seems to have come out of a book of fairy tales. Let’s go to our post of the day! What to do in one day in Monticchiello? Here at  Your Travel to Italy with Ana Patricia you make the trip of your dreams !!! ALSO: see our  “Accommodation in Italy – Tips for your holidays!”

The city is very well located and is close to other cities that are also worth visiting: it is just over 60 km from Siena, 30 km from Montalcino, 16 km from San Quirico d’Orcia, 9 km from Montepulciano and just 8 km away from Pienza. Monticchiello can be reached from Pienza or Montepulciano along the famous cypress avenue, with its curves famous around the world! When you reach the gate that gives access to the city (there is only one, no mistake!) you can already enjoy the breathtaking view of the hills of Val d’Orcia and, there, you will feel like you are in a medieval book! The beauty of this place is amazing! The best way to start your visit is to explore, unconcernedly, the city’s narrow streets. There, each corner presents a different panorama, but all equally amazing! Learn all about Tuscany here.

1) What to do in one day in Monticchiello? VISIT THE TRAITOR’S HEAD

There is a challenge for anyone visiting Monticchiello: to look for the “head of the traitor oppressed by the cannonball”. Do not worry! We give you a tip: it is on the facade of a house in the village streets, but look up, as the place is 5 meters high. This art in bas-relief dates back to the 14th century and depicts a traitor who, for two thousand guilders, opened the city’s gates to Florentine enemies.

2) What to do in one day in Monticchiello? VISIT THE CASSERO

Also visit the Cassero to admire its walls. The old system of fortifications was part of the Rocca, which was built in 1260. Today we can only see the tower with its sloping walls, but the preserved walls were interspersed with towers of various sizes and seven of them are still intact; you can also see the entrance door and its beautiful arch.

3) What to do in one day in Monticchiello? VISIT THE CHURCH OF SAINTS LEONARD AND CHRISTOPHER

Also unmissable is the Church of Saints Leonard and Cristopher. The church is the most remarkable monument in Monticchiello and was erected in the 12th century, in the highest part of the city, on a sloping ground. With a T-shaped plan, it is dedicated to Saint Leonard of Limoges. With regard to the ancient Church of Monticchiello, we can say that, although elements derived from Cistercian art prevail, it also maintains its typically Italian design, not only because of the coexistence of traditional Romanesque forms, but also because of the way they were. Exotic shapes attract our eyes like real magnets! It’s a very nice set. The Church is also enriched by a great pictorial masterpiece located in the chapel to the right of the transept: Our Lady with Jesus, by Pietro Lorenzetti, dated 1325.

4) What to do in a day in Monticchiello? VISIT THE POOR THEATER

We finally arrived at the most famous spot in Monticchiello: the Poor Theater. The theatrical experience is a component closely linked to the life and history of the city and represents a breath away from bourgeois life, with insights into current and daily events in the lives of people who did not belong to the upper class, presenting peasant life. It is a ‘life-theater’ written by the characters themselves, that is, by the people of Monticchiello.

Monticchiello’s Poor Theater is a social and cultural project born in the 60s, a period of deep crisis for the city. With the departure of several citizens from the city, who remained in Monticchiello, tried to rebuild their existence and added theatrical art to their routine. What makes it unique is its dramaturgical construction methodology and its staging counts on most of the village’s inhabitants. In 2000, the Theater was recognized as a World Heritage Site. Visits with reservation. For more information and reservations, click here!

5) What to do in one day in Monticchiello? VISIT THE CAPITONI MARCO WINERY

Visit the Capitoni Marco winery in Pienza. With its simplicity and kind service, the winery offers excellent wines for tasting and buying. It is a family business and welcomes its visitors as if they were true friends! A delight! To make reservations for a tasting, you can click here! 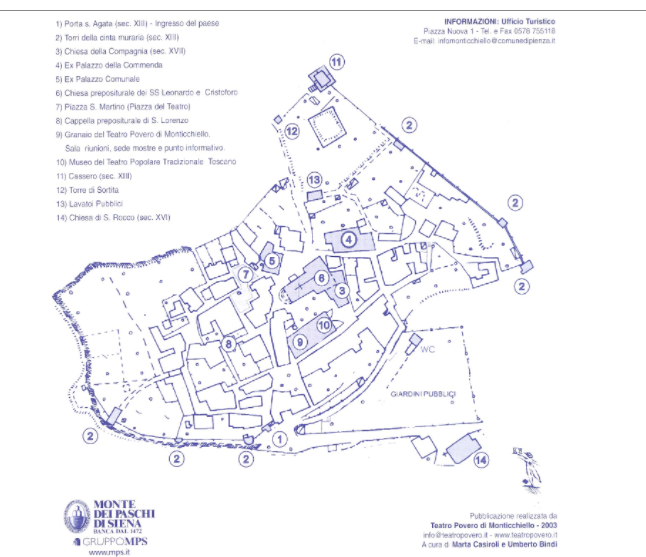 A little of Monticchiello’s history

Let’s start with a little history, after all, it’s always interesting to know a little bit of the history of our chosen destination and many of them are amazing! Well, the first official document where we find records of Monticchiello dates from 973. The document says that the Marquis Lambert Aldobrandeschi passes the city as a pledge to Father Ropprando of the Abbey of Amiatina; the place? Monticlu or Munticlo. Although the city was mentioned under another name in the Amiata documents from the years 775-860, the names correspond to Monticchiello, as it refers to the town of Montecchio, north of Montelaterone.

Until the 13th century…

Until the 13th century, however, the history of this important castle, seat of the baptismal church of St Leonard, remains almost completely unknown. What is known, in fact, is that in 1156 Count Paltonieri di Forteguerra donated it to Pope Hadrian IV, who later returned it to the Count. Later, it is said that the castle was ceded by the Apostolic See to the Order of the Teutonic Knights, while royal domain was exercised by a local aristocracy of Lombardi. Around 1175, the ‘politics’ began to emerge in the middle of history and the Municipality of Siena began to exercise power over Monticchiello. This power came in 1208, as indicated by a clause in the peace agreement signed between Siniens and Florentines and the fact that Monticchiello had levied a very high tax on the financing of Siena’s public debt.

In 1220, the “People” of the castle (about eighty householders) contacted the mayor of Siena to settle the matter with the Lombards. After many useless protests by the Teutonic Knights, and the Pope, for the acquisition of Monticchiello by the Sinians, Siena’s sovereignty over Monticchiello was established with a war, which took place between 1229-1235. In time: in June 1233, the consuls of Monticchiello swore chapters of allegiance to the mayor of Siena and forbade any woman or child from Montepulciano to be allowed “to reside in the castle (…) since they fled when that castle was conquered and destroyed”.

With the authority of the Republic restored, Monticchiello had a citizen in charge of the fortress and its garrison; however, in the mid-1300s, the tower was handed over directly to the Monticchiello community for custody on behalf of the Republic. After having suffered in the second half of the 14th century, like so many communities in the Val d’Orcia, Monticchiello was occupied at the end of the century by the Florentines and the Montepulcianesi who were at war with Siena and the Visconti. Montepulciano’s soldiers committed acts of violence and devastated the city. After this period, Monticchiello returned to the domain of Siena with the peace of Venice in 1401.

In 1442, Monticchiello was then an important agricultural center, with a ruling class of middle- and wealthy local landowners and an expanding and articulated state and financial organization. The peace lasted until 1502, when the castle was conquered by Cesare Borgia, and the city’s garrison was killed. On April 3rd, 1559, the war ended with the peace of Chateau Cambresis, French troops abandoned Tuscany, and all the fortresses of the Val d’Orcia surrendered to the Medici. Monticchiello was one of the last castles to be handed over to Duke Cosimo, which was made on August 15th, 1559. Finally, on April 6th, 1944, a “fact of arms” takes place in Monticchiello, which entered the history of the Resistance as the “Battle of Monticchiello”: a group of seventy guerrillas rejected and fled 450 soldiers from the republican guard. After all this, peace came to Monticchiello and, thus, the city remains today.

Watch this video on our YouTube Channel and get to know the best of beautiful Italy!!!!

What to do in one day in Monticchiello? Monticchiello is the kind of city that, if we didn’t know it exists, would go unnoticed, but once we know it exists and get to know its history full of challenges: it deserves a visit! And if you feel insecure or have no time, and need  help to organize your trip ,   do not hesitate to look for me! I will love to help you make your dream trip to Italy. And how can I do that? Continue reading this post until the end and you will understand how can we make your life and journey easier.

How to visit the Milan Duomo terrace?

Let’s visit the Park of the Monsters of in Italy