What are the rainiest months in Italy?

The climate in Italy is well defined, so it is easier to get organized when planning a trip. Would you like to know if you are going to get caught in the rain or not? I'll tell you in this post!

What are the rainiest months in Italy?

I know that those who follow the Italian news have seen that the world is falling in rain in Italy in some periods that it is not common to rain, and when we are in August, a month when it rarely (if ever!) rains in the country of the boot! I advance: it is atypical to rain at this time of year and the same thing happened last year. So, let’s learn what are the rainiest months in Italy? Get to know here what to do in Italian cities when it rains: Rome, Venice, Milan and Florence. Here at Your Travel to Italy with Ana Patricia you make the trip of your dreams!!! ALSO: see our “Accommodation in Italy – Tips for your holidays!”

Meteorologists are trying to understand this change in ‘behavior’ in the rains, but the most used explanation is the ‘war’ between the charged clouds in Africa and Europe; something like a ‘tug of war’ that Africa is winning and sending rain to Europe, mainly to Italy, which is in the middle of the Mediterranean; fact is: the seasons are ‘pretty messed up’ all over the world! Check out our Section on Climate in Italy!

Official data from the Italian Ministry of Agriculture, Aeronautics and Civil Defense

The data we will use in this post will be official data from the Italian Ministry of Agriculture, Aeronautics and Civil Defense, and we will use averages as recorded in the last ten years, which does not mean that you will or will not find rain in Italy. Remember that the weather is something that is unpredictable and even meteorologists make mistakes. I always suggest checking the weather forecast, especially during the months of change of season, as the weather can get quite confusing, O.K.?! Hot and cold … All on the same day! Now let’s go!

1) What are the rainiest months in Italy? RAINY SEASON

In the figure below (2017 annual average) we can see where it rains the most and as we can see Italy is not a very rainy country. 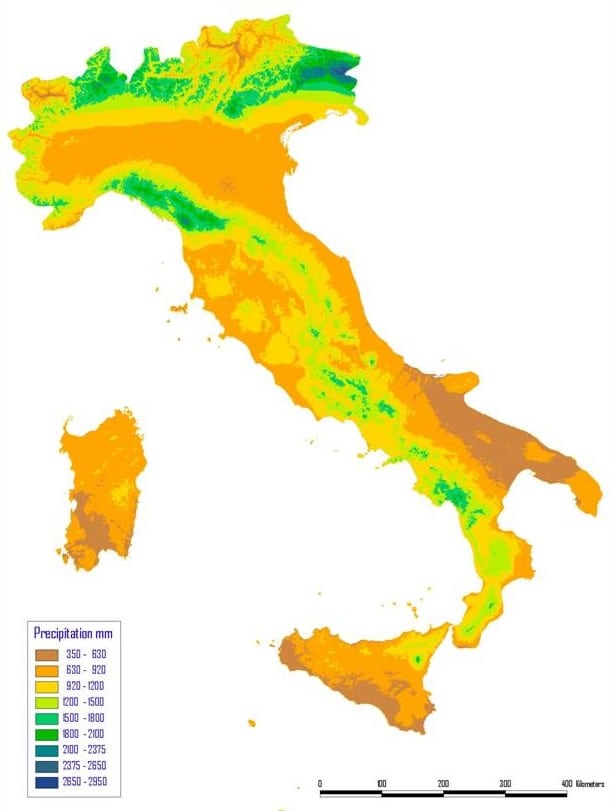 2) What are the rainiest months in Italy? ANNUAL RAINS

Another interesting fact is the amount of annual rainfall. The table shows the average rainfall per region and the general average for the country. As we can see, the average rainfall in the regions varied a lot in the last ten years and the record of rain was in the North region in 2014, when it rained 1280.8 mm! Where it has rained least in the past 10 years, it was in the central region of the country; in 2017 it rained only 498.4 mm. In February 2018, it rained more in the south than in the north, which also ended up surprising.

3) What are the rainiest months in Italy? COMPARATION

In the chart below, we can compare 2017 and 2018, which were the most atypical years when we talk about rain. March, in 2018, for now, broke a record of rain and recorded 210 mm! It’s a lot of rain, people! In September, as we can see, the average is higher (in the last 15 years), but rains are more isolated and less frequent, but with more intensity. It is also not a ‘common’ month to rain, but it does! 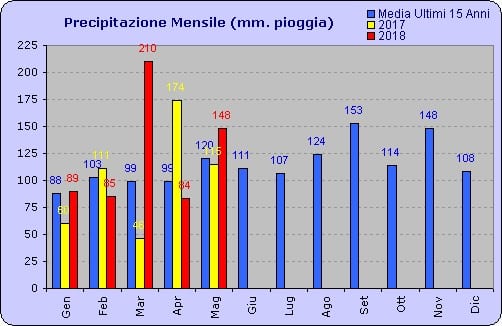 4) What are the rainiest months in Italy? SOURCES

Today, with global warming and a well-tempered climate almost everywhere in the world, it is difficult to ‘predict’ a rain. The rains come and go often without showing any clear signs of this and Italy also records some storms out of season. If you really DON’T WANT TO GET CAUGHT IN THE RAIN, travel in the warmer months, between June and August, as it is when the seasons are warmer and very dry, but… Already set aside a few euros to have to buy an umbrella in case of ‘surprises’ !

What are the rainiest months in Italy? The climate in Italy is well defined, so it is easier to get organized when planning a trip.

How to go to Venice from Rome?

What to do in Florence in winter?