The capital of one of the most beautiful regions in Italy, Umbria, the city of Perugia is charming, historic and home to some must-see places. Let's get to know the five main tourist monuments in Perugia?

Perugia is a medieval city full of attractions. With its unique charm, it’s the capital of the beautiful region of Umbria and that’s where I’ll take you today. Let’s get to know Perugia and its main tourist monuments?  Here at  Your Travel to Italy with Ana Patricia  you make the trip of your dreams !!! ALSO: see our  “Accommodation in Italy – Tips for your holidays!”.

With almost 170 thousand inhabitants, the city of Perugia, capital of the Umbria region, is a magnificent city. Filled with attractions, it is a medieval city full of history, culture and unmissable beauties. Today I take you to discover this splendid city, also famous for its chocolate, Perugia. How about taking a gastronomic tour in Perugia? Click here to learn more!

A little about history…

Well, there are few accurate records about the origin of the city, but some historians claim that the city was born by the hands of the Achaeans; some say that the city was founded by Euliste, the Etruscan founder who also founded Bologna. Although there are some theories, it is known that Perugia is born in the territory located to the right of the River Tiber, the side considered Etruscan. In the Etruscan era, Perugia became part of the “Dodecapolis”, that is, it was part of the twelve Confederate cities of Etruria which were: Veio, Cerveteri, Tarquinia, Vucci, Volsini (Orvieto), Chiusi, Vetulonia, Volterra, Cortona, Arezzo and Fiesole. The main idea of ​​this union of cities was to strengthen commercial alliances and enrich the area, since the territory has an excellent geographical position. Also read: 1 day itinerary in Perugia.

Perugia is also the city of chocolate. The history of chocolate with the Umbra capital is something intimate and full of love. It all starts in 1907, the year in which the infamous Perugina was founded. It is also in the city that Eurochocolate takes place, a fair dedicated to chocolate that always takes place in October. The city also has several museums dedicated to the food of the gods and even a themed hotel, the ChocoHotel.

Want to know the history of Bacio Perugina? I tell you:

La Perugina began its production with a luxury audience in mind, but in 1922, Luisa Spagnoli (one of the company’s partners) noticed that chocolate and hazelnut remnants were being thrown away; to avoid waste, Bacio was created, which became the brand’s flagship and launched it to the world: in 1939, the first store of the Italian brand was opened in New York and, of course, it was an absolute success. Currently, the company is owned by the Nestlé group, but maintains all its traditions and impeccable flavors.

And now, on to our tour of Perugia. Let’s find out which are the unmissable monuments of the city? Come with me!

It is impossible to talk about Perugia without mentioning one of the most famous fountains in the country in the shape of a boot: the Fontana Maggiore. Located in the center of Piazza IV Novembre, we find this beautiful Fontana, the ultimate symbol of medieval Perugia. The Fontana Maggiore was built between 1275 and 1278 and was based on a project by Nicola and Giovanni Pisano to receive water from the Monte Pacciano aqueduct. They wanted the fountain to have a circular staircase, consisting of two tubs of pink and white stone, topped by a bronze basin. Here we can see three nymphs holding an amphora from which the water flows and the upper basin rests on small columns from which some statues appear representing characters related to the mythical foundation of the city; in the lower basin we can see fifty panels that present the calendar of agricultural works, biblical, historical and mythological episodes, and the Guelph (lion) and the symbol of the empire (the eagle). There are also images, on the tiles, of the presence of two scenes taken from Aesop’s fables (heron and wolf and the wolf and lamb).

The Aqueduct of Perugia

Since we’re talking about a source, let’s go on to talk about water! Let’s talk about the Aqueduct of Perugia. This aqueduct was built in 1245 and was considered an extraordinary work as it did not use pumps and was capable of bringing water to a city as steep and uneven as Perugia. This aqueduct was deactivated in 1800, due to its costs, but the entire structure is still visible and is beautiful. The upper part is covered by stairs and defended by parapets, which offers us a kind of pretty road and is one of the postcards of the city. The most characteristic part is the one that goes from Porta Sant’Angelo (very close to the Cathedral and Fontana Maggiore) and goes through a bridge supported by a dozen spans with large arches and low, colorful houses.

The Cathedral of Saint Lawrence

Another must-see in the city of Perugia, of course, is the city’s incredible Cathedral, which is dedicated to Saint Lawrence, one of the city’s patrons. The works started in 1345 and ended only in 1490 – however, it is important to mention that both the side and the main facade of the church, until today, remain incomplete. On the inside of the Cathedral, we can admire a beautiful geometric pattern made in pink and white marble lozenges, but this pattern only decorates the underside. The main façade offers a beautiful view of Piazza Danti and is characterized by a baroque portal dating from 1729. The interior of the church is in late Gothic style, has three naves of the same height and is divided by imposing pillars.

A little more about the Cathedral

The decorations there were completed in the 18th century and, worth mentioning: the Deposition of Federico Barocci; the 16th century polychrome stained glass window by Arrigo Fiammingo; and the Funerary Monument in honor of Bishop Andrea Baglioni, created by Urbano da Cortona. The Cathedral has been a pilgrimage site for centuries, as it houses the Ring that belonged to Our Lady, kept in the Chapel of Sant’Anello. The ring is protected by the Reliquary of the Holy Ring, which is a work of the Italian Renaissance, but the shrine can only be visited twice a year: in July and September. In the Sacristy, be sure to observe the pictorial cycle by Pandolfi (1573-76), which is a fine example of Baroque illusionist painting. In the cloister of the Cathedral, visit the Capitular Museum, which in its 25 rooms house various works from the cathedral itself and from churches in the diocese. There you will be able to observe a rich collection of jewelry, liturgical objects, manuscripts, paintings and sculptures from the 11th to the 19th century. This museum also leads to the archaeological area of ​​the Cathedral, where you can see remains of the Etruscan, Roman and medieval cities. Everything is stunning!

The National Gallery of Umbria

Another must-see in the city is the famous Rocca Paolina. Magnificently quoted in a famous poem by Giosuè Carducci, Rocca Paolina is an ancient fortress built at the request of Pope Paul III and built by Antonio da Sangallo the Younger. The Pope’s idea was to make the city safe after a Roman invasion and thus be able to protect Perugia from future attacks. Its construction destroyed more than a hundred houses, churches and monasteries, coincidentally (or not!), most of the properties belonged to the Baglioni family, a family the Pope hated. Rocca was a symbol of papal authority until 1860, shortly before it was demolished after the city’s annexation from the Kingdom of Italy. From the old building we can see the retaining walls and the bastion that incorporates Porta Marzia. The most characteristic part of the Rocca that is still visible, without a doubt, are the underground floors, which pass under the entire side portico of the Government Palace and take us to Piazza Italia. It is a kind of city within the city, because there you will find several shops, bookstores and also several cultural events. 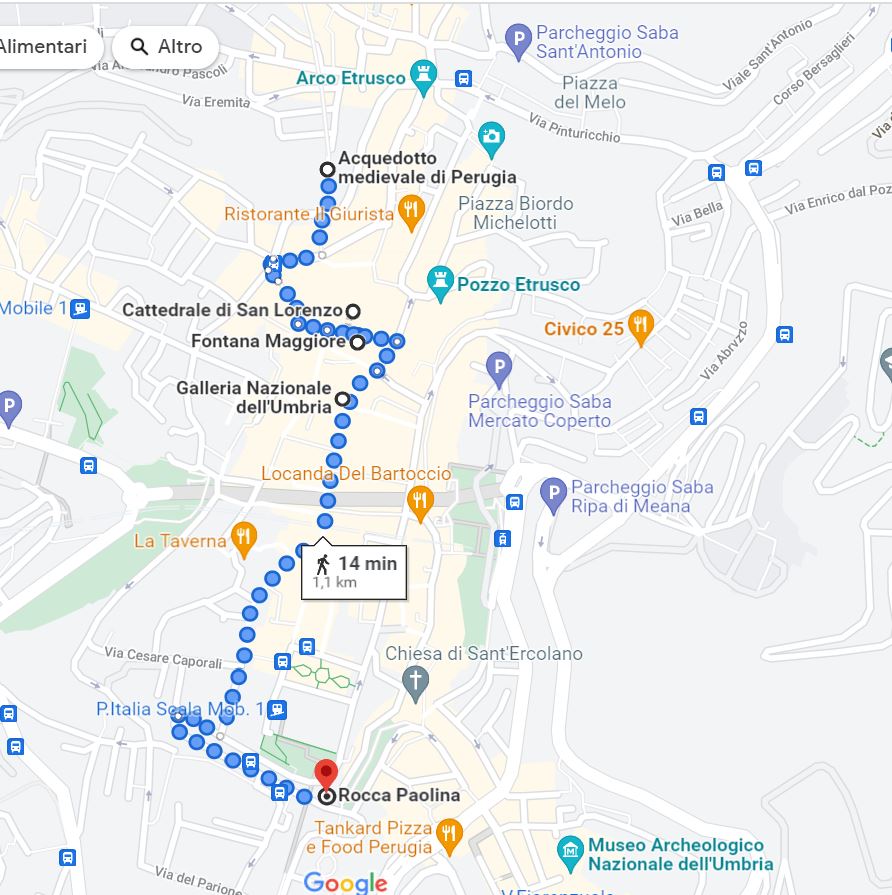 Subscribe to our channel and receive more videos with information and tips about Italy. Don’t forget to leave that Like 😉

Perugia and its main tourist monuments – Of course, Perugia offers us many other attractions and it would be almost impossible to put them all on our list, but remember, I am a tourism consultant and I can help you organize an incredible itinerary through this city full of charm, history and culture. Perugia is the kind of city that will delight you! Capable of transporting us back in time, Perugia is elegant but retains its medieval simplicity in a unique way!

Italian experiences: where to stay in Venice.

What are the 10 best Italian cheeses?