Located on the Riviera de Levante, in Liguria, Santa Margherita presents us with many beauties and a lot of charm.

With its almost 9 thousand inhabitants, Santa Margherita is a place already known by Italians, but unfamiliar to foreign tourists. Santa Margherita Ligure is one of the most charming on the Riviera di Levante. It is located on the coast of Liguria, and offers us calm and tranquility. Let’s visit Santa Margherita of Liguria?  Here at  Your Travel to Italy with Ana Patricia  you make the trip of your dreams !!! ALSO: see our  “Accommodation in Italy – Tips for your holidays!”.

1) Let’s visit Santa Margherita of Liguria? TAKE A WALK ON THE BOARDWALK

We start the tour with a walk along the boardwalk, to admire the sea and the life of its residents. The city’s coast is a delight and impressively beautiful. There you will find bars, restaurants, shops, and – especially during the summer – it‘s very lively and busy. The colorful houses complement each other with the blue of the sea and offer us very special panoramas. Discover the best consultancy in Travel to Italy here!!!

The city also presents us with some very interesting historical monuments: a small castle built by the sea in the mid-16th century; and another castle with a charming square tower, Castello Paraggi, built at the beginning of the 17th century – this castle, however, is now private property and, therefore, it has undergone several renovations and has undergone alterations in its facade, but it remains splendid and, even if from afar, this building is worth a look. Find out all about Liguria here!

3) Let’s visit Santa Margherita of Liguria? GET TO KNOW THE PIAZZA MAZZINI

Also not to be missed is Piazza Mazzini. Here is the meeting point for the residents and, in the summer, it hosts concerts, performances by street artists and is very busy. Here you will also find great options of restaurants, bars and shops. If you don’t like a lot of movement, I suggest you avoid staying here, as the large flow of people can bother you.

Other attractions in the city are its churches, the most important being the Basilica of Santa Margherita d’Antiochia. This church has its origins in the 13th century, but was rebuilt in the 17th century. Its facade and bell tower are in the 18th century Baroque style. The church dominates the view from all directions, and beside the entrance to this church is an attractive park, Villa Durazzo-Centurion, which has a beautiful, typical Italian-style garden. Inside Villa Durazzo, you can visit the museum located there where you can see the so-called Royal Apartments. There is also a small gallery with paintings from the 17th and 18th centuries. The gardens also present you with a beautiful view of the city as well as some statues and a turtle pond. Very interesting!

Map with the attractions in Santa Margherita 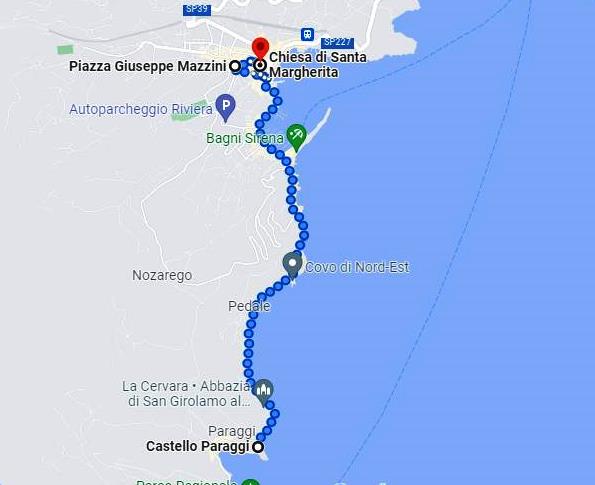 Take advantage of the short distance and visit Portofino; it is possible to reach it on foot via a pleasant walk or by boat. It’s also important to point that accommodation in Santa Margherita is cheaper than Portofino, so I suggest that the base city used is Santa Margherita. Find out all about Portofino here! How about a kayak tour of Portofino? Click here to learn more! 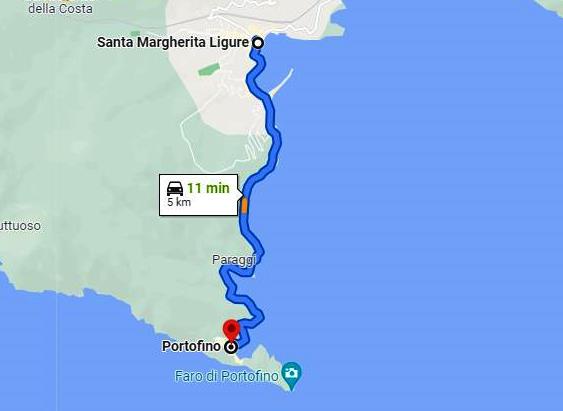 The history of the city of Santa Margherita

It all started in the 3rd century, with the discovery of a cinerary urn that had an inscription in Latin – which, today, can be seen in the basilica of Santa Margherita. The urn indicated that the city had been populated in the Roman era and would have been devastated in 641. Inhabited by fishermen and named after the ancient toponym of Pescino, the city suffered numerous Saracen attacks until the 10th century.

In 1229, Santa Margherita became a manor of the Fieschi family, submitted to the Republic of Genoa, which incorporated the Sammargheritese territory into the nucleus of Podesta de Rapallo. In the Middle Ages, the inhabited area was divided into two main cities: Pescino and Corte. Pescino ended up being a district, as some tapestries in the Vatican Museums show us, and in 1432, the city was attacked by the Republic of Venice. In 1608 it became part of the capital of Rapallo, along with other villages such as Tigullio, Zoagli and Val Fontanabuona.

With the arrival of Napoleon and his troops in 1797, the Sammargheritese territory once again belonged to the Gulf of Tigullio, with Rapallo as its capital in the Republic of Liguria. On July 18, 1798, the territory was divided in two again: the III canton of Santa Margherita, where two municipalities were added, San Siro and San Lorenzo della Costa, and the territory of San Giacomo della Corte, with the municipalities of Nozarego and Portofino; both were included in the Jurisdiction of Tigullio and the relations between the two main villages were very different, both from a political point of view and from a religious point of view.

On December 22, 1812, Emperor Bonaparte united the two municipalities into a single administrative body and called it “Municipality of Porto Napoleone”. However, this union did not last long: with the fall of the emperor, in 1814, and the incorporation of the territory to the Kingdom of Sardinia, in 1815, through the decisions of the Congress of Vienna, the various municipalities adopted a provisional line, but the decision did not right. According to historians, the community of San Giacomo tried, in 1817, to re-divide the territories into two distinct municipalities, but with negative results.

In 1818, the Kingdom of Sardinia united the two main communities in the “Municipality of Santa Margherita di Rapallo”, in the province of Chiavari, already under the administration of Genoa. From 1859 to 1926 the territory was included in the 5th district of Rapallo, always in the province of Genoa, in the Kingdom of Italy, and its current name was adopted in 1864 by a special royal decree signed by Vittorio Emanuele II of Savoy.

Shortly after World War II, Santa Margherita turned into a tourist resort, but it experienced some natural problems; among the atmospheric phenomena and events that affected the city are the flood of October 1995 and the violent storm in October 2018. Today the city is fully recovered, in all its splendor, and awaits you so it can enchant you!

Watch this video and know more about Italy!!

Let’s visit Santa Margherita of Liguria? For lovers of history, the sea, breathtaking panoramas and unique beauties, Santa Margherita is the ideal destination. As we have already mentioned, the city is very frequented by the Italians themselves and offers us good options for accommodation and restaurants, but remember to make your reservations in advance (especially for dinner), as the city tends to get very busy, especially during the summer.

How to get from Catania airport to the city center?

How to get from Palermo Airport to the city center?

The best cellars in Tuscany

Dinner among the vineyards in Tuscany

What to visit in Rome in 3 days?

How to travel low cost in Italy?

The best cellars in Tuscany

Dinner among the vineyards in Tuscany