Let’s go to Portobuffolé in Veneto!

Portobuffolé is a city in the province of Treviso, in the Veneto region. The municipality is part of the association of the most beautiful villages in Italy and today we are going to present a list of the main attractions of the city.

Let’s go to Portobuffolé in Veneto!

Portobuffolé is a city of about 750 inhabitants in the province of Treviso, Veneto, and is the smallest city in the province in terms of population and area. The municipality is part of the association of the most beautiful villages in Italy, and its origins are controversial. Let’s get to our post of the day! Let’s go to Portobuffolé in Veneto!  Here at  Your Travel to Italy with Ana Patricia  you make the trip of your dreams !!! ALSO: see our  “Accommodation in Italy – Tips for your holidays!”.

Well, arriving in the city, you enter Portobuffolè via the bridge that leads to Porta Trevisana, destroyed in 1918. Then there is a small cobbled square surrounded by beautiful buildings; we are in Piazza Beccaro (Beccaro Square).

From the square, you will soon arrive at Gaia House, which is a splendid 14th century residence where the famous and controversial Gaia da Camino lived and died. The facade is softened by barred windows enriched with slender, elegant columns with lotus capitals. The frescoes preserved on the first floor remind us of a courteous atmosphere that, between one war and another, gave a little serenity to the small courtyard.

3) Let’s go to Portobuffolé in Veneto! VISIT THE CASTLE AND TOWER

There is also a castle in the city and some say that Gaia was one of the hosts of feasts and banquets. On the second floor, there are fortified cities, drawbridges, towers and palaces, enough to reinvigorate our medieval imagination and transport us to another era! The 10th-century municipal tower is the last of the seven ancient towers of the castle. With its 28 m high, it features the ‘hole’ from where the convicts were lowered to prison. The house at the foot of the tower was a government palace, and it retains the inscription, between two oval windows: “Made from the foundations on March 9th, 1187”. Above the door of Monte di Pietà, founded in the 1500s by the Venetians, there is a rare example of “leon in moeca”, with a terrifying appearance, depicted in times of war.

Speaking of the lion, the Lion of Saint Mark also dominates Piazza Maggiore: here were the public offices and the most important families resided. The Town Hall has a large loggia and elegant oval windows. The great hall, called “Fontego“, served as a deposit for cereals and salt. On the façade, there are inscriptions and coats of arms of the 16th century Podestà.

Before becoming a Christian church, the Duomo was a Jewish synagogue. It was consecrated in 1559 and restored several times, both inside and out. There is a German wooden crucifix from the 15th century, a precious heather red wood altar by a local artist (1983) and a splendid organ from the house Callido in Venice, with 472 bars of zinc and tin, costing, in 1780, a fine sum of over 4,000 Venetian gold lire (a small fortune!). In the restoration work on the former archesynagogue’s house, next to the Cathedral, a stone with the seven-branched Hebrew candelabra and some letters of the alphabet appeared. Interesting!

From the square you reach the “Toresin” and Porta Friuli, where, above the external arch, there is a Lion of Saint Mark who praises the “rights and duties of man and citizen”, a clear sign of the passage of the French Revolution. The Friuli Bridge, built in 1780 in baked stone, replacing the wooden drawbridge, has two large arches and is flanked by six elegant balconies; below, Livenza River ran.

6) Let’s go to Portobuffolé in Veneto! VISIT THE CHURCH OF SAN ROCH AND THE GIUSTINIAN PALACE

Outside the village, it is worth visiting the Church of San Roch with the Madonna della Seggiola, which is a wooden sculpture from 1524. The Giustinian Palace, built in 1695 by the noble Venetian family Cellini and later passed on to the Giustinians, is also worth mentioning. Don’t miss the Oratorio di Santa Teresa (St Teresa Oratory), built by the Cellinis; it is rich in stuccoes and frescoes as well as the Servos church, which was consecrated in 1505.

Attractions in Portobuffolé in Veneto 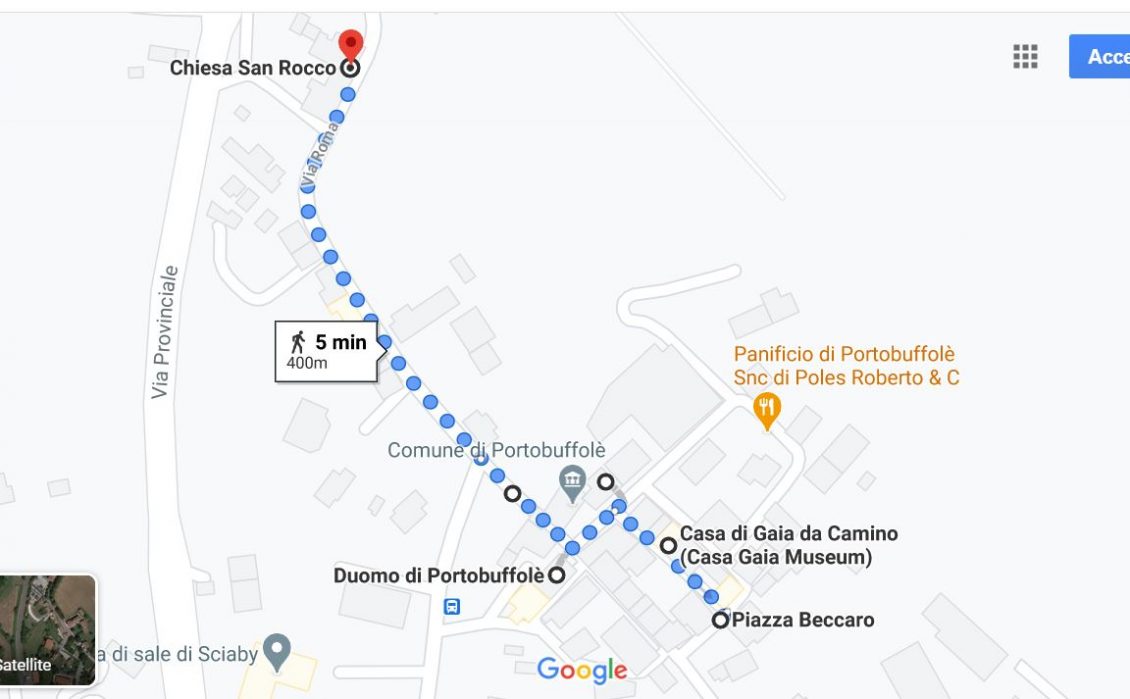 A little of Portobuffolé’s History

It is said that before its birth, to the left of Livenza, was a humble village of anglers, farmers and shepherds, whose origins date back to the 3rd century BC. The village was called Septimum de Liquentia. Septimum because it is seven miles from the ancient city of Oderzo (Opiergium). Local Christian history recalls the Septimum between 620 and 700 AD, on the transfer of the body of Saint Titian from Oderzo to Ceneda. In a document from 997, the term “castle” first appeared and, in that year, a lease agreement was defined between the Bishop of Ceneda, Sicardo, and the Doge of Venice, Pietro Orseolo II. In another document, there is registered: “… Castellarium Portus Buvoledi …” and, from there, Portusbufoledi was born. The derivation, instead of buffalo, as is commonly believed, is found in the word bova, which from medieval Latin means channel.

The city went through several periods of domination, starting with the Feudal Period. After a period of probable Carrara domination, the castle of Portobuffolè became part of the Patriarchate of Aquileia. In August 908, Emperor Berengar donated the castle to the Bishop of Ceneda, Ripalto, at the request of his wife Bersilia. In 1166, Portobuffolè passed to Treviso, and in 1242 returned to Ceneda. Gerardo de ‘Castelli, instigated by the people of Treviso, destroyed the castle, which was retaken and restored by the Bishop of Ceneda. Finally, Tolberto da Camino, husband of the famous Gaia, immortalized by Dante in the 16th corner of Purgatory, became lord of Portobuffolè on October 2nd, 1307.

Beginning of the Veneto Domain

When the Veneto domain began, on April 4th, 1339, Portobuffolè, through a decree of the Senate of Veneto and by resolution of the Maximus Council of Treviso, came to belong to Venice. However, later, the Genoese forced the Venetians to hand over the Marca Trevigiana to the Archduke of Austria, who sold it to Francesco di Carrara. Faced with protests against the decision, Portobuffolè once again belonged to Venice. After a brief period of Turkish rule, Portobuffolè lived a period of great splendor under Venetian rule and the Republic of Venice granted the territory the title of City, also offering the shield and a podestà (position of power).

Portobuffolè became the district capital, seat of lawyers, notaries, architects and artisans, an important and active commercial and cultural center. With French rule, in 1797, Portobuffolè started to house a civil and criminal court of first instance. Also by decree of the French government, on May 5th, 1797, its jurisdiction was extended to Mansue, Fossabiuba, Baite, Basalghelle, Cornarè, Rigole, Vallonto, Lutrano, Villalonga, Saccon di Lia, Camino, Stala di Oderzo, Levada, Fraine, Colfrancui, Campagnola, Burniola, Roverbasso, Campomolino and Codognè. In 1807, the city ceased to be a district, and in 1816 the Settimo fraction passed to the council of Brugnera, until 1826.

In the modern period, Portobuffolè contributed to the struggle for the unification of Italy by sending some youths as volunteers. On July 15th, 1866, in the midst of popular cheer, the first group of Italian soldiers entered the city. In the Great War, between 1915 and 1918, the city suffered from mourning and, after the war, it endured the economic crisis and the large number of emigration. In World War II, it also saw its citizens leave the city. Gradually and slowly, the village rose again and soon became a furniture house, thanks to the intelligence and tenacious will of the population. Portobuffolè went through two major floods, in 1965 and 1966, which submerged the city in a sea of ​​mud, destroying the work and the hopes of many years of sacrifice. Today it presents itself gently and delicately for those who want to know this place full of magnificence, despite all the mishaps along its trajectory.

Let’s go to Portobuffolé in Veneto! Although small, I say that this village is really worth visiting, especially if you are in Treviso. Take a round trip from Treviso and enjoy a full day in Portobuffolé, relaxing in the Italian atmosphere of Veneto.

Where to picnic in Florence?

What to do in a day in Aquileia, in Friuli-Venezia Giulia?