Located on the slopes of the Tuscan-Romagnolo Apennines, in the province of Ravenna, Emilia Romagna, we find a colorful city surrounded by three hills. Today I take you to discover a city that breathes joy! Today we go to Brisighella.

How about getting to know a city full of charm, beauty and colors? I could easily be talking about Burano, in Veneto, but today we are in the Emilia Romagna region, in a charming little town called Brisighela. Here at  Your Travel to Italy with Ana Patricia  you make the trip of your dreams !!! ALSO: see our  “Accommodation in Italy – Tips for your holidays!”.

In the province of Ravenna, framed by the Apennines, we find a medieval city that keeps its secular charm practically unchanged. Considered one of the most beautiful villages in Italy, we find this little gem called Brisighella.

And now, finally, let’s get to know the charming Brisighella.

We start, of course, with the colorful Marconi Square, the city’s postcard. Its elevated arcades, bars, shops, restaurants and the constant movement of tourists and locals alike are a delight!

From there, it is impossible not to head to Via degli Asini (“Road of the Donkeys”), also known as Via del Borgo. This street is unique in the world: located on a road that passes by pastel-toned houses, it is all lit up by arched windows.

It was built in the 14th century and had defensive purposes, although it was also used so that bandits could escape carrying plaster stolen from the quarries with the help of donkeys. It was named that way, because in this place were the stables for the animals.

2) Brisighella: a rare beauty in Emilia Romagna. VISIT THE 3 HILLS

From there we go, of course, to the three hills. At the first of the three limestone pinnacles we can see the Rocca, which was commissioned in 1310 by the Manfredi: with its architecture typical of medieval fortresses, it now houses the Museum of Man and Plaster and is open all year round. Entrance to the museum costs 3 euros and access is at Via Rontana, 64. To get there you can follow the plaster path that starts at Marconi Square itself.

3) Brisighella: a rare beauty in Emilia Romagna. VISIT THE CLOCK TOWER AND THE SANCTUARY OF MONTICINO

Also not to be missed is the 19th century Clock Tower. This is an old defensive bulwark commissioned by Maghinardo Pagani. It was built in 1290 and rebuilt in 1850, the year the clock was installed, which has a different dial: it only counts six hours, not twelve. Interesting! To get to the Clock Tower, you just have to climb 350 steps, but believe me: it’s worth it! The view is magnificent!

Then we head to the third hill, which is where the beautiful Sanctuary of Monticino is. The ascent is short and, after a few meters, nature dominates the panorama. The Sanctuary was built in the 18th century and is uniquely beautiful!

Our tour in Brisighella 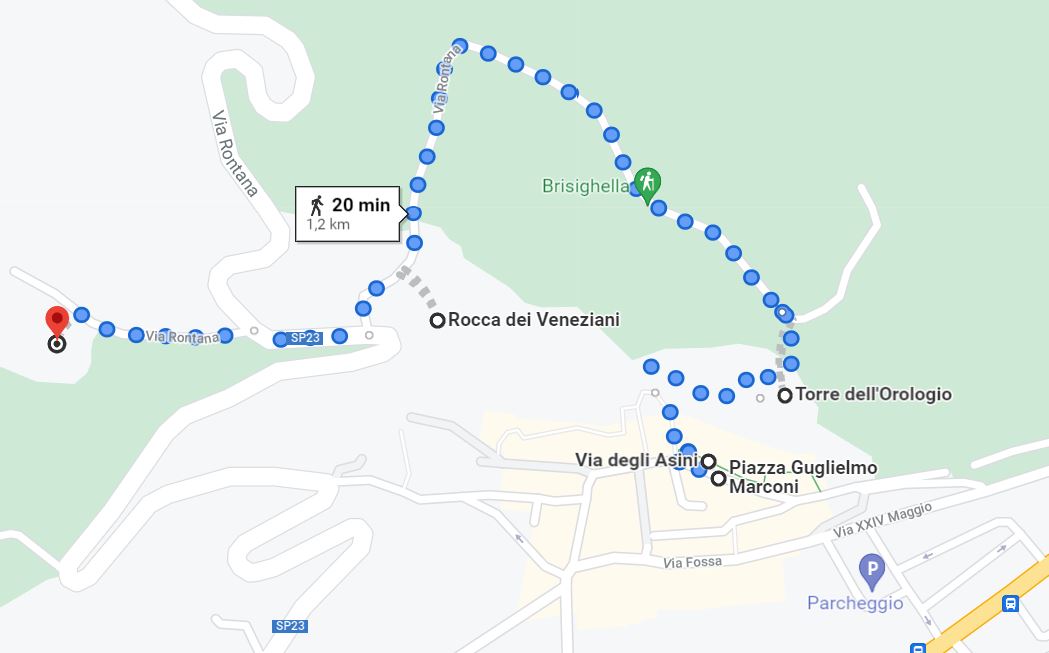 Afterwards, take time to walk around the city; if you want, head to another very special place: the Natural Park of Vena del Gesso which is where you will find the Cave of King Tiberius.

I suggest going by car: both there and along the way, the view is wonderful! Make strategic stops to take some photos, as it really is a unique place! The Grotta del Re Tiberio is located in Borgo Rivola and can be visited for free, with the guide, from May to September at the following times: Saturdays at 3:30 pm and Sundays at 10:00 am and 3:30 pm – access is paid during the week . If you go there on Saturday or Sunday, arrive at least half an hour early. If you are traveling in November, be sure to enjoy the Sagra del Tartufo. The truffle festival is very famous and the city is super excited! During the festival, it is possible to have tastings, buy canned truffles and learn all about one of the most admired delicacies in the world. The various typical stalls offer us a series of delicious products and an infinity of typical dishes, giving us the chance to get to know a little better the incredible enogastronomy of the city. NOTE: the festival may change dates, so check the official website for information about the event.

The origins of the city are very old. There are some finds found in the “Tanaccia” cave, located near the Monticino-Limisano road that takes us to Riolo Terme, and they show us the ancient presence of some communities dating from the Neolithic period and the Bronze Age. Later, this same valley was occupied by Celtic peoples, and these evidences were confirmed through a necropolis found in the village of San Martino, in Gattara.

Some historians, however, point out the toponym to Gallic populations. Brisighella has the root of its name in brix, which means ‘high, peak, height’, but there are other different interpretations, such as, for example, one that indicates that the name of the city derives from ‘bressichella venetiana’, that is, a small portion of the Serenissima Republic located in the region of Emilia Romagna a few centuries ago. Some researchers also work with the hypothesis that the city was a Greek colony and, therefore, would have been baptized ‘braxica’, which means ‘cabbage’, and this name would indicate that, there, the Greeks planted the vegetable .

Evidently, the Romans also passed through there, and it was in this area that they built the Via Faentina, which at that time was called Via Antonina, a simple tribute to Antonino Pio. This road branched off with Via Emilia and crossed the Apennines. It wasn’t a big road, and it was practically a trail that served as a corridor for transporting salt, for example. Even today we see remnants of the Roman denomination along the road. We have, for example, Quartolo, which is at kilometer four of the way, and the Quinto River, at the fifth kilometer. We also find Nono Bridge, at kilometer nine and some other names that refer us to the nomenclature adopted in the past and persists until today. The current city was born being attributed to Maghinardo Pagani da Susinana, who was considered the greatest medieval leader of the Romagna region; as a tribute, the Municipal Palace, in neoclassical style, was named after him.

Watch this video and come with me in tour! Discovering Cleto

Brisighella: a rare beauty in Emilia Romagna! Brisighella is a city little known to the general public. Despite being small, it offers excellent options for tours, especially for lovers of incredible panoramas and abundant and beautiful nature!